The female breast is mostly made up of a collection of fat cells called adipose tissue. This tissue extends from the collarbone down to the underarm and across the middle of the ribcage.

A healthy human female breast is made up of 12-20 sections called lobes. Each of these lobes is made up of many smaller lobules, the gland that produces milk in nursing women. Both the lobes and lobules are connected by milk ducts, which act as stems or tubes to carry the milk to the nipple.

Within the adipose tissue is a network of ligaments, fibrous connective tissue, nerves, lymph vessels, lymph nodes and blood vessels.

The US National Breast Cancer Foundation has an excellent video on this topic. 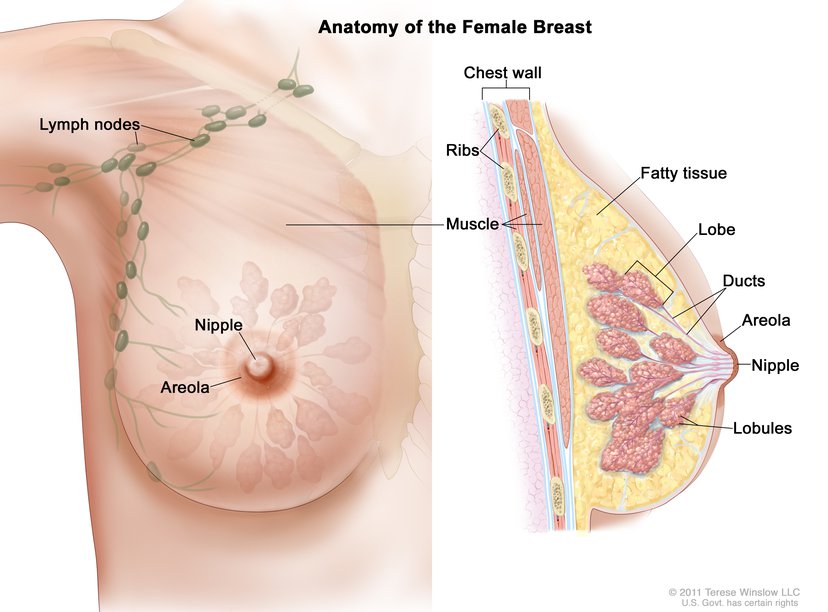 What is breast cancer?

Breast cancer is a malignant tumour that originates in the cells of the breast.

Breast cancer is the most commonly diagnosed cancer among women in Australia. Breast cancer occurs predominantly in females, although men can also develop the disease. 1 in 8 women will develop breast cancer in their lifetime. It is more common in women aged over 60, although around ¼ of women with breast cancer are younger than 50, and it can occur at any age.

Which of the following statements about breast cancer is correct?

For an alternative overview of the topic, see this page from Cancer Council Victoria.

Our lungs are the main organs we use for breathing and they make up part of what is called the respiratory system.

The airways to each lung consist of large airways (bronchi) and small airways (bronchioles). Air that we breathe in first goes into the nose or mouth, down the trachea and then into the bronchi and bronchioles. Alveoli are tiny air sacs at the ends of bronchioles, which pass oxygen into the blood and collect the waste gas, carbon dioxide, from the blood. When we breathe out, carbon dioxide is released back into the atmosphere. 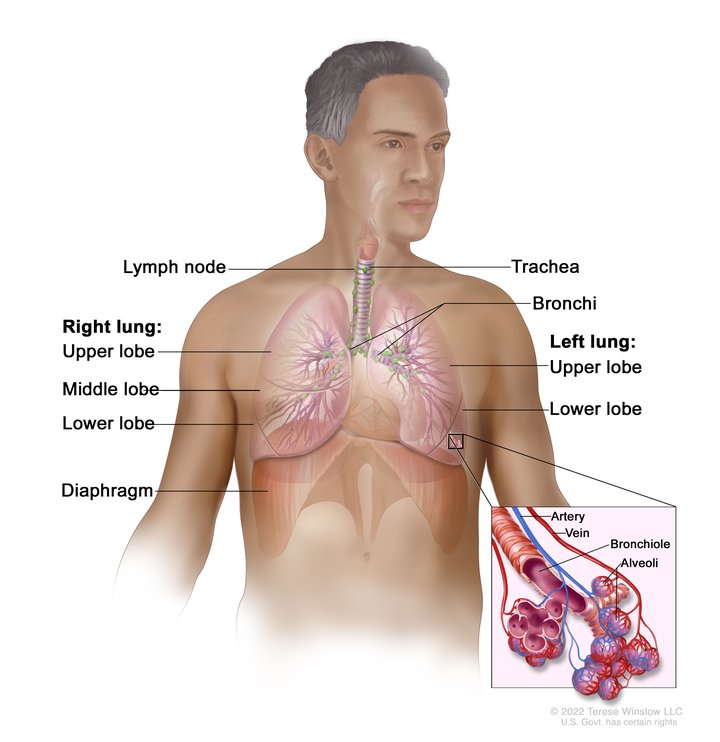 Our lungs look like two large, cone-shaped sponges: the lungs are composed of sections called lobes (left lung has two lobes, right lung has three lobes). The lungs rest on the diaphragm, which is a wide, thin muscle that helps with breathing.

A number of structures lie in the space between the lungs including:

The lungs are covered by two layers of a thin sheet of tissue called the pleura, which is about as thick as plastic cling wrap. Its inner layer (the visceral layer) is attached to the lungs and its outer layer (the parietal layer) lines the chest wall and diaphragm.

What is lung cancer?

Lung cancer is a malignant tumour in the tissue of one or both of the lungs. A primary cancer starts in the lungs, while a secondary or metastatic cancer starts somewhere else in the body and spreads to the lungs.

A similar overview has been compiled by the Australian Cancer Research Foundation. See here.

Small cell carcinoma This type of cancer accounts for about 12 per cent of all lung cancer cases. It usually arises from epithelial cells that line the surface of the middle of the lung. This type of cancer is associated with a history of smoking. Sometimes the cancer will stay confined to the place in the chest in which it originated; this cancer type is described as ‘limited’. Once the cancer has spread it is described as ‘extensive’.

More detailed information can be found at this page from the US National Cancer Institute.

While not strictly a lung cancer, mesothelioma is a rare chest and abdominal lining cancer mainly affecting people exposed to asbestos particles.

You can explore the NIH page on COPD here.

So what is the relationship between COPD and lung cancer?

A more detailed discussion of the relationship between COPD and lung cancer can be found here.

Like many other cancers, lung cancer is capable of metastasis to other organs. Indeed, many of us have likely heard that lung cancer is extremely aggressive, with 30-40% of patients with non-small-cell lung cancer (NSCLC) exhibiting some form of metastatic disease by the time of diagnosis.

Metastatic locations include, but are not limited to:

Exactly which metastatic location indicates a poor prognosis is constantly debated. Some studies suggest that brain metastasis is a poor prognostic marker, while other studies suggest that liver metastasis indicates an even worse prognosis. Since metastasis generally characterizes the systemic damage and aggressiveness of a cancer, it is safe to say that doctors must at least take into consideration a patient's metastatic location when developing aggressive treatment plans.

A more detailed discussion on metastatic location and impacts on survivability, including the statistics, can be found here.

A more detailed analysis of CRF in lung cancer patients can be found here.

Which of the following statements about lung cancer is correct?

Structure and function of skin

The skin is the largest organ in the body. The skin protects against heat, sunlight, injury and infection. The skin also helps control body temperature and stores water, fat and vitamin D. The skin consists of three layers: the epidermis, the dermis and the subcutis.

The epidermis is the top layer of the skin. It is very thin. It protects the deeper layers of skin and the organs of the body from the environment. The main types of cells in the epidermis include: 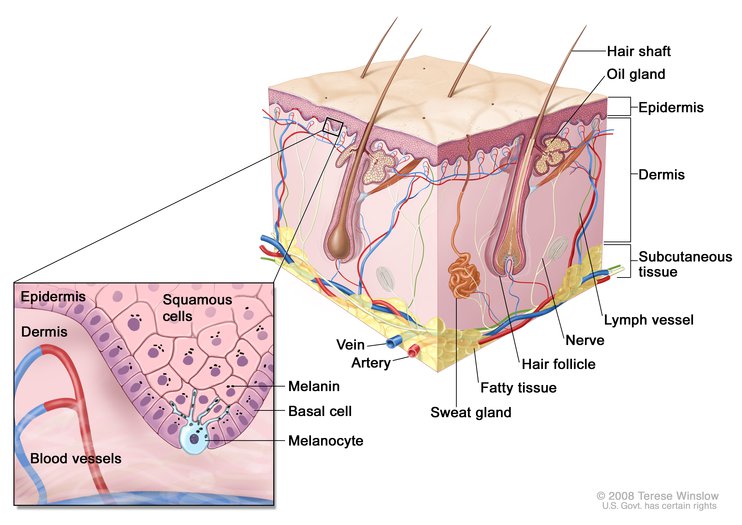 The epidermis is separated from the deeper layers of skin by the basement membrane.

The dermis is the middle layer of the skin. It is much thicker than the epidermis. It contains hair follicles, sweat glands, blood vessels, and nerves that are held in place by a protein called collagen, which gives the skin its elasticity and strength.

The subcutis is the deepest layer of the skin. The subcutis and the lowest part of dermis form a network of collagen and fat cells. The subcutis helps the body conserve heat and has a shock-absorbing effect that helps protect the body’s organs from injury.

What is skin cancer?

Melanoma is a cancer that develops in melanocytes. Melanocytes produce melanin to help protect the skin from ultraviolet (UV) radiation. When melanocytes aggregate together in the skin during childhood or adolescence they form a mole. Most moles are quite safe, however sometimes the melanocytes in a mole begin to grow and divide in an uncontrolled way. If they start to grow in an unregulated way, either expanding outwards or down into the lower layers of the skin, they can become a melanoma.

See Cancer Council and US National Cancer Institute for further reading on melanoma.

Melanoma is the most serious form of skin cancer and grows very quickly if left untreated. It can spread to the lower part of your skin (dermis), enter the lymphatic system or bloodstream and then spread to other parts of the body, such as to the lungs, liver, brain or bone.

The most important warning sign for melanoma is a new spot on the skin or a spot that is changing in size, shape, or color. Another important sign is a spot that looks different from all of the other spots on your skin (known as the ugly duckling sign).

The ABCDE rule is another guide to the usual signs of melanoma.

Which of the following statements about skin cancer is correct?

Structure & function of the gastrointestinal tract

The gastrointestinal or digestive tract (also known at the GI tract or gut) is the system of organs which remove and process nutrients (vitamins, minerals, carbohydrates, fats, proteins and water) from foods and helps pass waste material out of the body. The gastrointestinal tract is made up of the oesophagus, stomach and the small and large intestines.

For a basic overview of the gastrointestinal tract, click here to watch a YouTube video by CrashCourse. 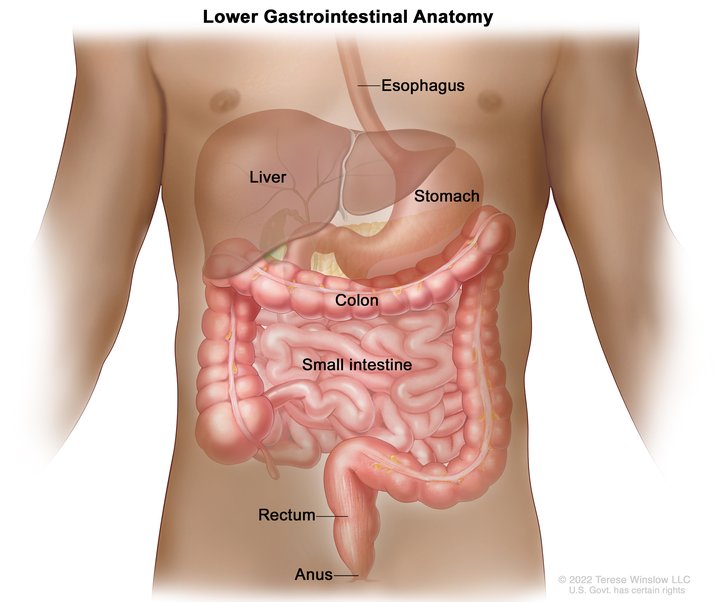 What is bowel cancer?

Bowel cancer, also called colorectal cancer, is a cancer of the colon or rectum.

Bowel cancer is a malignant growth that develops most commonly in the lining of the large bowel. Most bowel cancers develop from tiny growths called ‘polyps’. Not all polyps become cancerous. Over time some polyps can become cancerous. Cancer can narrow and block the bowel or cause bleeding. In more advanced cases, the cancer can spread beyond the bowel to other organs.

As most bowel cancers start as polyps, all polyps should be removed to reduce your risk of developing the disease. Almost all polyps can be removed without an operation during the procedure of colonoscopy. Once removed from the bowel, the polyp can no longer develop into cancer. Even if a polyp develops into cancer, in its early stages it can be cured by surgery.

The Cancer Council and Bowel Cancer Australia have some neat further resources on this topic.

Which of the following statements about bowel cancer is correct?

A pdf of the following table is available for download. 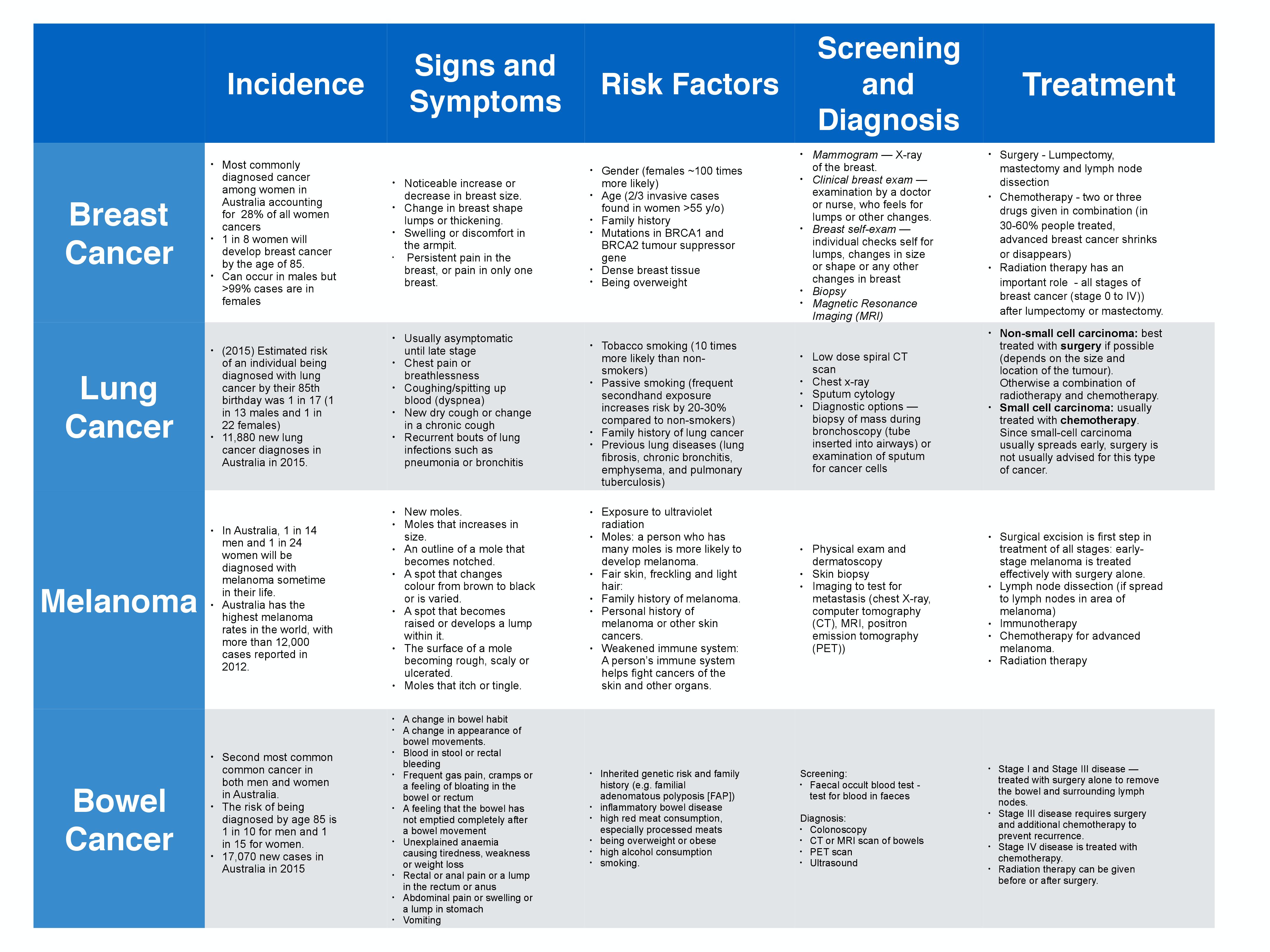 Which of the following statements about cancer is INCORRECT?